Good for Your Soul 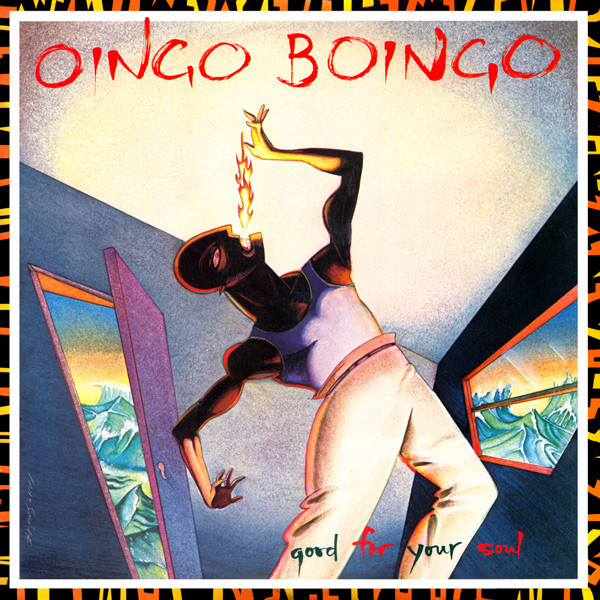 My favorite album from one of my favorite bands. I don't think any other band, with the only exception being The Police, defined the 80s as well as Oingo Boingo. This album highlights the band at their most experimental and abrasive... and I love every damn minute of it.

If you ask me, this is easily a career highlight for Danny Elfman. The sheer energy he packs into the opening track of the album, Who Do You Want to Be? never fails to get me pumped. His performance on the title track, Good for Your Soul is just fucking outstanding. He's delightfully weird on Fill the Void and Little Guns. My favorite track would have to be Pictures of You which is just so... unsettling, in the best way possible.

Pictures of You also marks a turning point for the band. Songs like that and Dead or Alive are noticeably darker than their previous material. The band would continue to go deeper into this dark direction with albums like Dead Man's Party. Exactly how well that ended up panning out for them is debatable, but in my opinion it was executed brilliantly here. Of course, the rest of the band also shines on this album. The guitars sound absolutely incredible (the guitar solo of No Spill Blood makes me fuckin' NUT). The bass is nice and crisp, never taking too much attention but making its presence known in tracks like Sweat. The synths sound amazing and weasel their way into every track perfectly. Honestly, it might be one of my favorite details in this album. Regardless of the tone of the song, it manages to fit in really well. Silly and immature on Good for Your Soul and yet dreary as all hell on Pictures of You.

And of course, we can't dare forget the horns. They show up sporadically to tie many songs in a nice little bow. They just add so much character to the album, it's hard to convey with just words. I love the chaotic breakdown in Cry of the Vatos or the little fanfares in Sweat and Wake Up (It's 1984).

If I did have some complaints about the album... I think Wake Up (It's 1984) overstays its welcome and Little Guns is fun but honestly pretty underwhelming, especially given all the tracks that preceded it.

But don't let that fool you: This album is seriously top tier shit. I love it for how incredibly abrasive it is. Not just sonically, but tonally and lyrically as well. I've already spoken about the vocals on the opening track, the entirety of Cry of the Vatos deserves a shoutout in this regard, but the real highlight is the lyrics on Nothing Bad Ever Happens. It's just so unapologetically offensive; it's the 'fuck you, don't tell me what to do' attitude that I fell in love with on some of their older tracks, like Capitalism from Only a Lad.

Couldn't possibly recommend this one enough. Give it a listen!