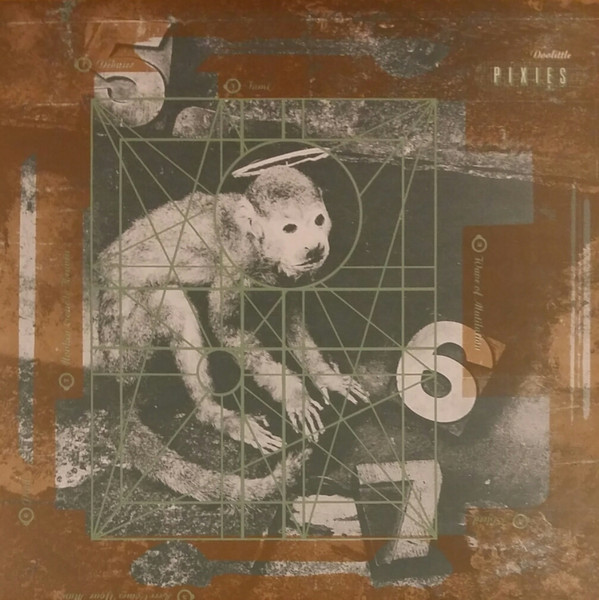 THIS
MON-
-KEY'S
GOOOOOOONE
TO HEAVEN!

Seriously that song is so good holy shit.

This was the first song I heard by the Pixies. I can't really remember when I first heard it, all I knew is that I fell in love with Debaser almost immediately. Some of the other songs took quite a while to grow on me. I actually didn't like Monkey Gone to Heaven for a while since I assumed it was some weird creationist anthem. Yeah, really. It's easier if you don't ask.

I went through a phase where I was completely enamored by anything and everything music of the 90's. Nirvana, Pearl Jam, Soundgarden, and everything in between. Eventually Nirvana and groups like them fell out of style with me. All except for Pixies. The real test of an album is to see how well it holds up after a year... or 2... or 31. In fact, if Wikipedia is to be believed, this album actually turns 32 on the 17th! You wouldn't guess that by listening to this album since, like most of the Pixies' work, sounds like it was made yesterday.

Black Francis's vocals run the gambit from smooth and sultry tones on Here Comes Your Man to gutteral death metal growls on Tame. Kim Deal also shines brightly on this album. Francis and Deal's dynamic is just so cool, and really unique within the world of Alt Rock. Deal backs up Francis no matter what planet he's on. Take a listen to the song Silver when you get the chance. Believe it or not, Deal is actually the lower-pitched voice! It's just so delightfully creepy and atmospheric; it's really no wonder that Kurt Cobain would cite this band as such a huge inspiration.

I'm struggling to say more about this album, since I'm running out of syllables for the word good. It's just really fucking good. Not since Ween do I think I've heard a band shove so many styles into a single project and have it end up sounding good in the end.

For a while I was honestly torn between this and Bossanova as my favorite Pixies album. It wasn't until I started writing this article did I really think about how fantastic this album is. Give it a listen!

THIS
MON-
-KEY'S
GOOOOOOONE
TO HEAVEN!