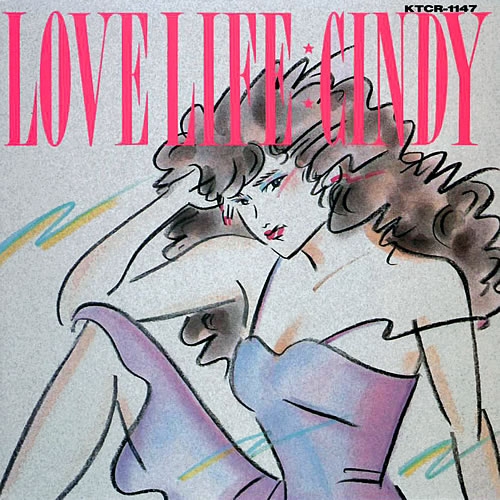 Some of the most wholesome music you'll ever hear in your life.

I am unsure whether to classify this as J-Pop or not. The J- refers to the country of origin and not much else. If I didn't know who Cindy was before listening to this album, I would have naively assumed she was of American, or perhaps of "vaguely-European" descent.

This isn't just because of her firm grasp of the English language, which is exceptionally good for a non-native speaker. This album boasts an incredibly solid "supporting cast" of musicians, Japanese and American alike, including, of all people, Stevie Wonder as producer. Yes, the Stevie Wonder. Probably explains why this album sounds as absolutely rich as it does.

Assuming the risk of sounding like a piece of uncultured filth, this album doesn't sound very Japanese to me. Perhaps that says more about me than it does about Love Life, or perhaps I'm actually on to something. Cindy only has writing credits for about half of the songs on the album, and in those cases she's always accompanied by a second writer. In saying this, I don't intend to downplay her skills as a musician or even her contributions to this album. Rather, I'm just making the point that, more than her other albums, this album is definitely a team effort. Of her albums, this one isn't my favorite, but is probably her most solid and the one I find myself most often recommending to people.

Cindy's predominant skill was actually composing and writing for artists other than herself, most notably an artist by the name of Miho Nakayama. (I'm assuming that J-Pop nerds, of which I am not one, will know who this is since I sure-as-hell don't! I dab on you nerds.) Her following two albums would see her assuming more writing and composing credits. It is for this reason that, among her discography, Love Life is particularly unique.

Love Life is an all-around shining example of top-tier musicianship. Superb instrumentation, production, songwriting and, last but not least, adorable vocals. Cindy really flexes her skills as a singer throughout the entire album. She can be sassy or cute, somber or bright, intimate or explosive. In fact, I think the first two tracks of the album, One Track Mind and Garden of Love while good in their own right, wouldn't be nearly as memorable if not for Cindy's vocals.

The album doesn't really start to shine until the third track, Inside of Your Love. Cindy's voice guides you through an incredibly soothing groove. The song starts out so subdued that you can basically hear all the individual instrumental bits. With those, they pull you in, then the chorus doesn't let you go. This is one of those songs that, once it gets going, I can't stop listening (unless there's an emergency, like needing to play it again from the beginning).

The next song, Skin Deep, possibly more than any other song on the album, showcases Cindy's skills as a singer. I just love the way she "acts" throughout the song. The second verse has her speaking in a cute, hushed tone, almost like she's whispering to you. Then she ramps up again for the chorus which, to use the parlance of our time, SLAPS! I think what makes this song so great is best illustrated by example. This song was originally written for Cindy but was then outsourced to some other artists, including Cher, of all people. Needless to say, Cindy's version is about 30 times better. Cindy's voice is so full of energy, yet Cher sounds like she's falling asleep. You can compare the cringe narcoleptic Cher version to the based cute and wholesome Cindy version with these links if you don't believe me.

Spread the Love is the song I would have assumed was written by Stevie Wonder had I not known the song was actually written by someone else (curiously enough, he actually wrote the next song: Think Your Love Away). If Skin Deep demonstrated her "acting," this track demonstrates her raw vocal range. Among my favorite tracks, this song was definitely the one that took the longest amount of time to grow on me. It eventually did, and now I'm just blown away every time I hear it. I find the following track considerably less memorable. It is the longest track on the album and isn't really justified in being so. Cindy's vocals are also noticeably more subdued than on previous tracks. Subdued may not be the right word. In fact, suppressed (by the other instruments) is a better way of describing it. All that in mind, the song is far from bad, and I usually don't skip it.

In contrast to the last two tracks, Try Your Luck Again is a song I basically fell in love with on my first listen, and was definitely the song that "opened my eyes" to how expertly crafted this album was, even bearing that weird spoken-word bit in mind (which I have, of course, memorized). This song sounds absolutely heavenly. Cindy's vocals are as angelic as ever, and that acoustic guitar just ties the holy thing together in a beautiful little knot. (Such a serendipitous typo, by the way. I meant to write whole and wrote holy instead for some reason. It's staying in.) This is my favorite song on the album...

...or it would be if not for the penultimate track, You and I. It is the most energetic track on the album, and was the song that got me interested in listening to this album in the first place. This song, as well as many others from this album, appeared as background music in an anime called Maison Ikkoku because of course that's why I know about it. The anime is kinda crap to be honest, but the music is great. I got Cindy out of the 50 something episodes I watched, so I'd count that as time well spent. The song is a duet with a guy by the name of P.J., who I don't think has done much outside of other collaborations with Cindy. Either way, he's a good fit. Everything about this song is super cathartic. I love the lyrics, I love the harmony between Cindy and P.J., I love how incredibly THICC that bass-line is, I love the energy of the chorus, I love the goofy skit near the end of the track, and there's the outro which is just to DIE for.

After the absolute BANGER that is You and I, the last track is a bit of a letdown. Something in the Air has grown on me since my initial listen, and I like the idea of an "epilogue" track; a subdued, chill track to let you unwind while the credits roll. If any of you are familiar with the Ween album Pure Guava, the track Poop Ship Destroyer serves a similar function. Even so, the track still feels a little unnecessary and is easily the most forgettable song on the album. The track is in the undesirable position of having to follow up You and I, so perhaps I should cut it some slack. All this in mind, the track isn't bad.

Cindy would release two albums after this one, which I'd like to review at some point. It's honestly a shame that Cindy was not more popular outside of Japan, since I think she's incredibly talented as a singer and, as will become apparent from her next two albums, as a songwriter. Unfortunately, Cindy's life was tragically cut short by cancer, which she succumbed to in 2001. If you ask me, that's the strongest proof that God doesn't exist.

I'm joking, of course. For those who are curious, I do believe in God (A.k.a. Yahweh, El, Cindy, Jehovah, etc.)