Smoke 'em if You Got 'em 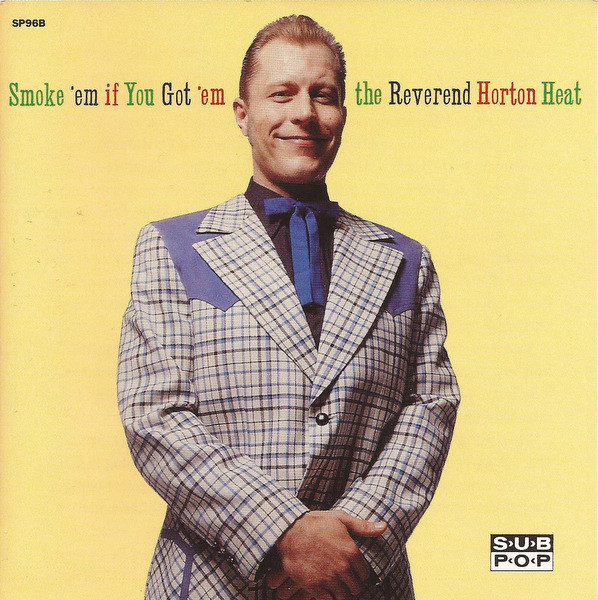 Let's cut to the chase: this is one of my favorite albums of all time. Sometimes when I listen to an album, it takes a while for me to really appreciate it. In fact, I can think of a few of my favorite albums that I absolutely hated on my first listen. This was not one of them; I knew pretty much from the first track that I was in love with this album. The genre Psychobilly may have caught your eye. That is The Reverend's gimmick. Psychobilly is a niche genre that combines elements of Rockabilly with Punk Rock (and a splash of Surf Rock, because why the hell not?) This genre was pioneered by a band called The Cramps and in my opinion was perfected by The Reverend Horton Heat.

I don't remember where I read this, but in reference to the lyrics of Bad Reputation one reviewer said something along the lines of:

I think this describes not just that song, but the whole album. It rides this really nice line between the kinds of music your grandpa loves and detests respectively. Awesome, sleazy lyrics, phenomenal instrumentation, and an absolutely incredible amount of energy packed into a 39-minute package. The sheer power in songs like I'm Mad, Psychobilly Freak Out, and Marijuana is fucking unmatched. The Reverend also manages to squeeze a surprising amount of variety out of such a niche genre, in such a short amount of time. It's insane to think that a song as dreary and miserable as It's a Dark Day and one as unapologetically goofy and offensive as Bad Reputation or Eat Steak can exist on the same album and not sound out of place.

The production also brings the whole thing together. The guitars grind like chainsaws, the drums add an incredible oomph to every beat, and worlds alone can't convey just how powerful the ACOUSTIC BASS sounds.

When listing my favorite tracks, I had to limit myself to not include all of them. Also, I'd be lying if some weren't better than others. The only song on the album that I have even the whispers of a negative thing to say would be Big Dwarf Rodeo, which is absolutely by no-means a bad song. It just isn't quite as energetic as the others. And to its defense: it has a lot to live up to. On any other album that song would be a highlight, so the fact that it's the worst part of this album goes to show just how great it is overall. In my opinion, this album is an absolute MUST-LISTEN.