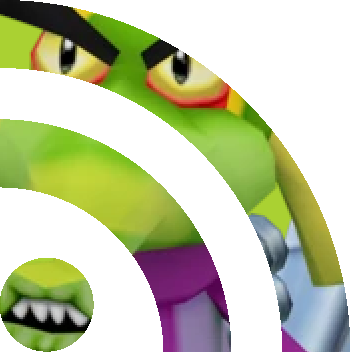 This article is rated N for normie-friendly!

In this article, I'll be going over how to use RSS and, more importantly, why you should be using it. Personally, if someone is suggesting I do something, even if it's in my own self-interest, I'd like to at least know why. So, let's tackle the question of "why?" first:

Why should I use RSS?

RSS technically stands for RDF Site Summary but is best thought of as standing for Really Simple Syndication. An RSS feed generates the equivalent of a social-media feed, but is not tied to one specific site or service. Let's take a look at an RSS feed: 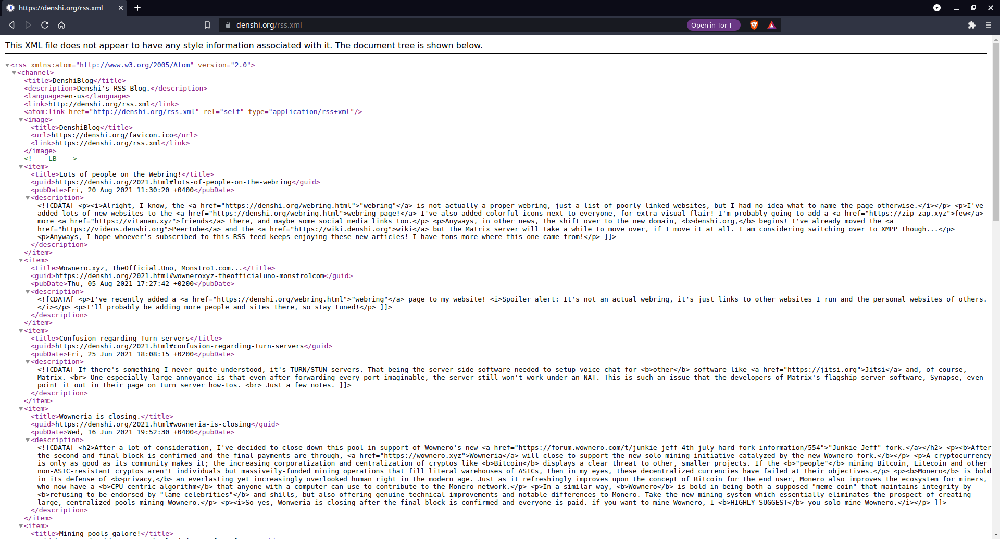 and this tells us... nothing!

An RSS feed by itself is difficult to read. What an RSS feed really is, is a bunch of code (or more specifically, mark-up) that, when parsed by an RSS feed reader, turns it into something much more readable: 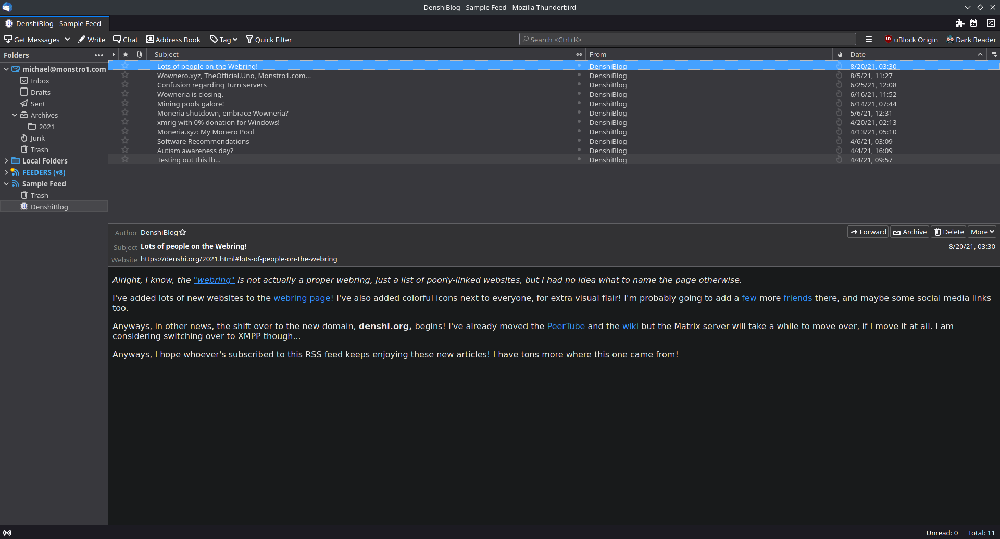 Well that's nice, but how is this useful? There are a few very good reasons.

Let's say that, for example, I want to follow a YouTube channel, a friend's Twitter account, a news site, and a friend's personal blog. How could I stay up-to-date with them? Well, I could rely on platform-specific tools such as subscribing and following. This would require me to have accounts on these platforms, and these platforms may not show me everything I want to see. They may hide ‘potentially inappropriate’ posts, or may push posts aside to serve ads. Some smaller sites, like personal blogs, may not have many means of notification at all. So, I'd just have to constantly re-check their sites and hope I don't miss something relevant.

Or, I could just use RSS.

Instead, I just open up my RSS reader. Then, whenever new content is posted to the RSS feed, my feed reader will notify me! It's all organized in one convenient list, which I can customize to my liking. I will get more into clients later, but I use Thunderbird as my feed reader, which is also my email client. So, I can look at my emails and tab over to see my RSS feeds. I can see when new YouTube videos are posted without having to worry about potentially missing out on a good video due to some new layout change or alteration of the ‘community guidelines.’ I don't even need an account to do this, either! This talk of YouTube leads me into my second point...

Regardless of your political persuasion, this should be important to you. The political landscape is always changing. Political issues and social attitudes that were once mainstream are now highly controversial, and can easily get you banned. Anyone that has spent any amount of time on YouTube understands the threat of demonetization very well, but it goes much deeper than that. Many people that would now recoil in disgust at words like ‘retard’ could have easily found themselves using the word casually as recently as ten years ago. On the flip side, some ideas that are more generally agreed upon now, such as the acceptance of gay marriage, were once very unpopular.

Big Tech has not really attempted to hide its political interests as of late. But even if you view that as some kind of paranoid conspiracy, I think you'd have to at least acknowledge that corporations have a financial and social incentive to adhere to mainstream values. Now that means cracking down on things such as ‘homophobia,’ but 10 years ago the roles could have very easily been reversed.

Tech companies are also very sneaky about how they censor people. In fact, it could be happening under your nose without your even realizing it. YouTube has admitted to pushing ahead what they call ‘authoritative sources’ and supressing what they call ‘borderline content’ in their search results. What's to stop them from doing it to your subscription feed? On Twitter, shadow-banning (suppressing the spread of posts) is an open secret.

If you're interested in an idea that is, has been, or could become controversial, RSS is a must. RSS is just a raw stream of content that isn't beholden to any kind of algorithm or political ideology.

As RSS itself is just mark-up, the end user has lots of freedom over how they choose to organize and consume its content. I think this point is better illustrated through example, which leads us into the next portion of the article:

How do I use RSS?

Note: This tutorial is for the follower, not for the creator of the RSS feed. If you're interested in running your own RSS feed, I'd recommend this video by my friend Denshi.

Getting an RSS feed reader

There are many, many RSS feed readers out there. If none of the readers I've shown here interest you, a quick search will find plenty more options.

The one I use personally is Thunderbird, but mainly just because it doubles as an email client. If you're only interested in RSS, there are better options out there.

I think the best basic option is QuiteRSS. It's a little bloated, but it gets the job done. And besides, it's much better than letting Twitter serve you ads! This ‘tutorial’ will use QuiteRSS, although there are many other options out there. If you're on Linux like me, then Liferea and Akregator are also good basic visual options.

If you'd like to use Thunderbird as your reader, I'll refer you again to Denshi's Video.

I will talk more about how to actually get RSS feeds later. For now, let's just use mine as an example. Copy this link into your clipboard: 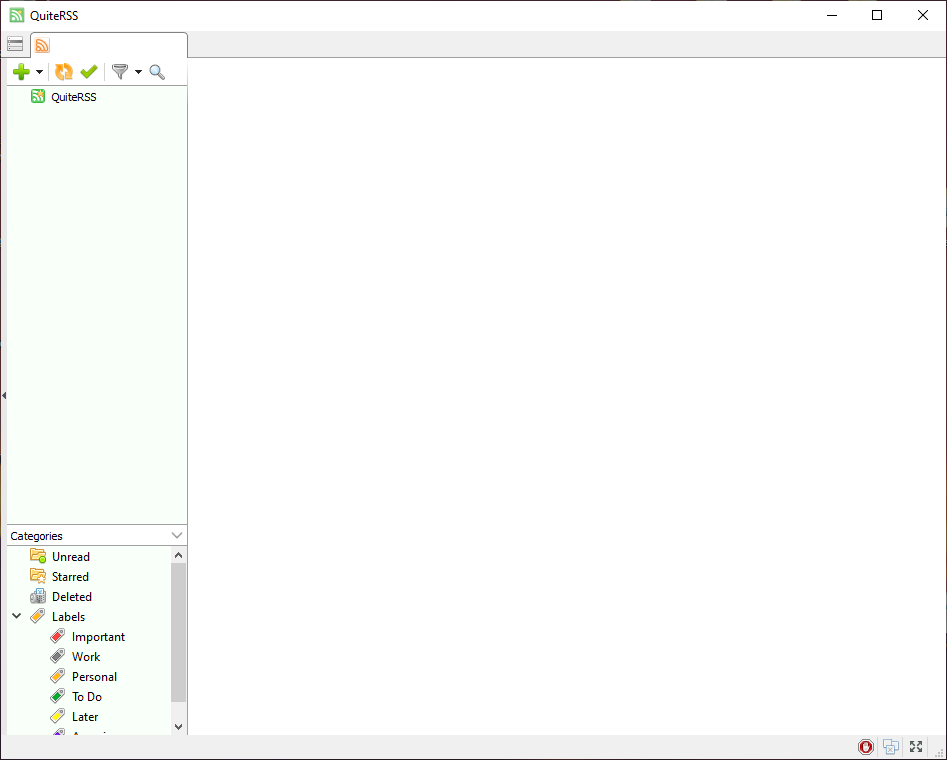 On QuiteRSS, click the little green plus symbol in the upper-left corner. Alternatively, open the drop-down menu and click "add feed." Then, paste the RSS feed link! 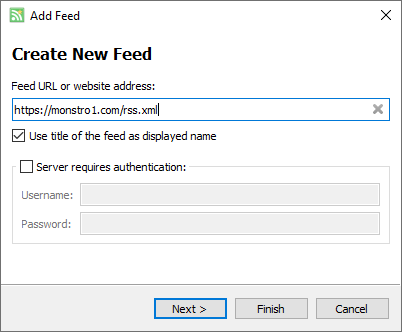 And that's it! It is quite literally that simple. 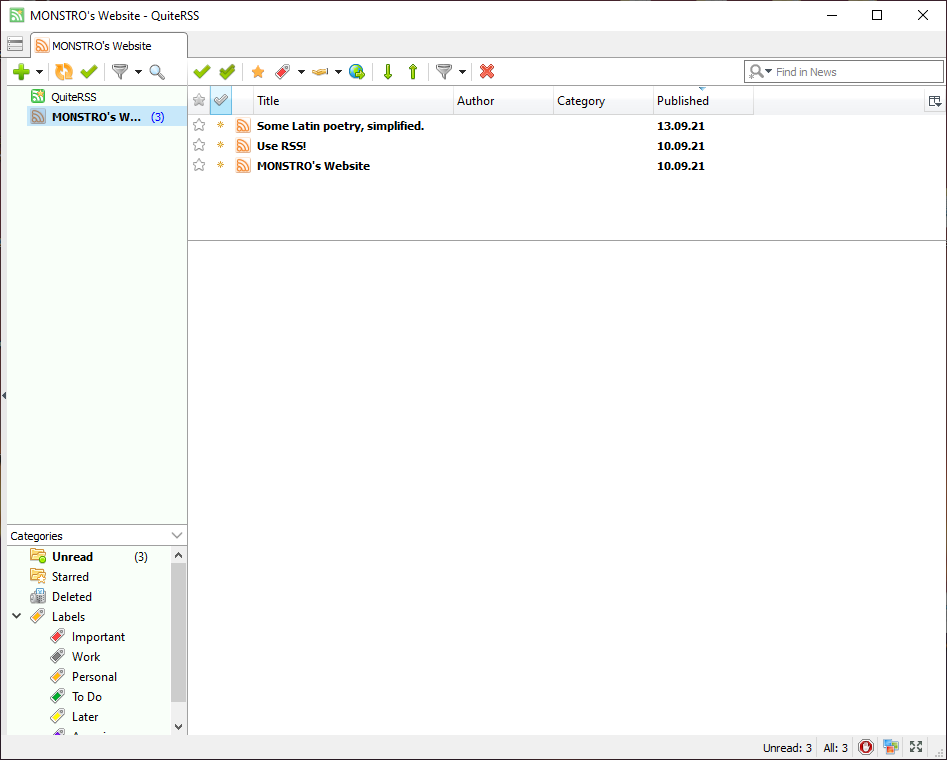 However, you should know how to import and export your feed list. Click the drop-down menu located all the way in the upper-left corner. 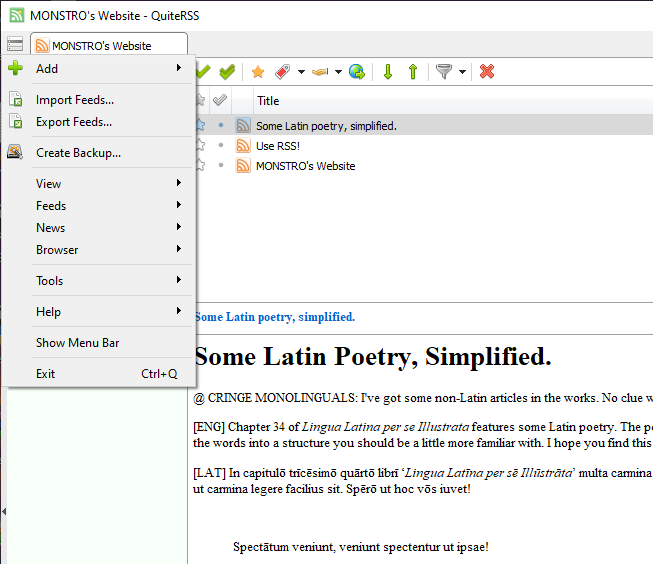 Click "export feed" to generate an OPML file. Name it whatever you like. This way, if you switch RSS feed readers, all you need to do is load this file!

For most sites, getting an RSS feed is as easy as looking for the RSS logo. Let's use Kanzenshuu (a Dragon Ball news site) as an example. Click the button all the way to the right. Then copy the link in the address bar. (I believe theirs is https://www.kanzenshuu.com/feed/). Alternatively, right-click the button and select "copy link address." Then, just paste that link into your reader!

Unfortunately, many of the ‘big’ sites (such as Youtube and Twitter) either keep their RSS feeds hidden or have removed their RSS feed functionality altogether. Luckily, there are some workarounds.

YouTube has built-in RSS feeds, but they're hidden. Thankfully, most RSS readers will accept a channel URL and redirect to the feed URL. Thunderbird doesn't, which is why I don't reccommend it to newcomers. In QuiteRSS, entering either of the following will give you an RSS feed for my YouTube channel:

Thunderbird (and some other readers) require you to actually have the feed URL. The feed url for YouTube channels looks something like this:

Combine the two together (without brackets) and you'll get:

Note: You must use the channel ID. Unfortunately, this:

Doesn't yield the same results. Frustratingly, sometimes you'll come across a channel and can't find the ID. I've found that opening up a video and then clicking on the channel's name, immediately below the video's title, will yield the URL with the channel ID. If you're using most other readers, you don't have to worry about this at all!

Twitter unfortunately removed its RSS functionality years ago. Probably because they realized they couldn't advertise and issue corrections about election fraud via RSS. Thankfully, there's a workaround. Someone made an open source front-end called Nitter, which does support RSS feeds. Nitter, in a similar fashion to PeerTube, is software running on a server. Anyone with the technical know-how can run their own instance. Granted, that isn't really necessary. You can visit the official instance here or see a list of public instances here.

Let's try this! I'm not transgender, so I don't have a Twitter account. My friend Paul does, however, so we can try this with his. Search for "FierceTheBandit" on your instance of choice, or, just click the image below: 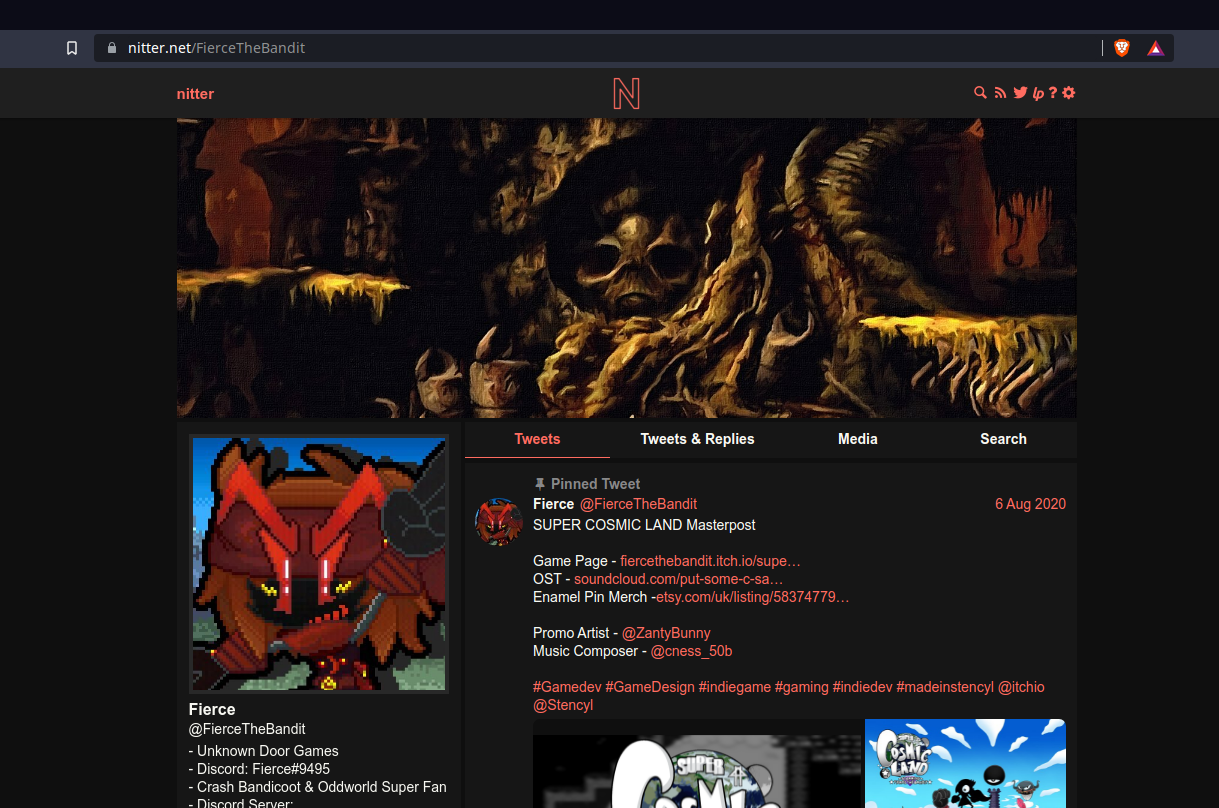 Then, just click the RSS logo in the upper right corner, and copy the link to your reader. Alternatively, you can just add "/rss" (without quotes) to the end of the URL. 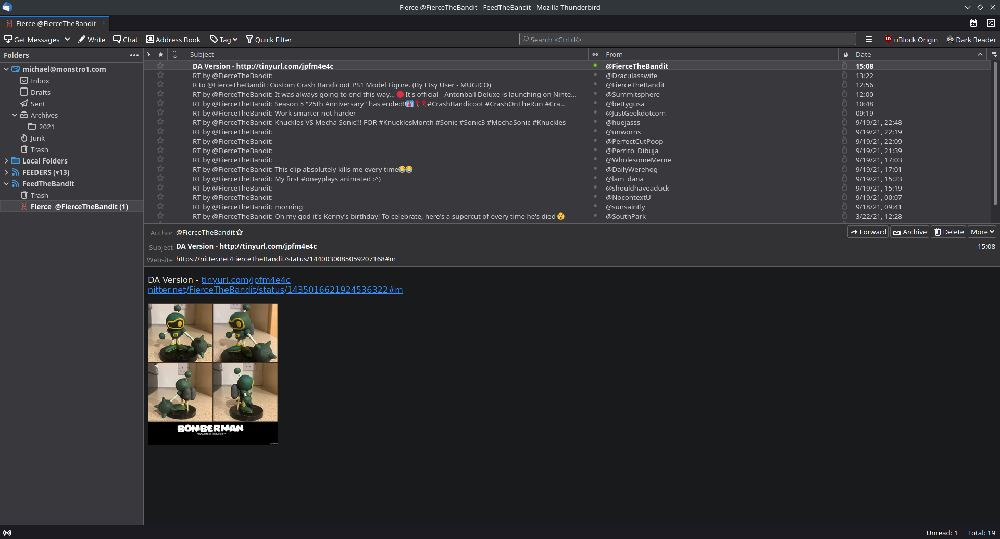 And there we go!

But m-muh likes and retweets!

You're an idiot and you don't deserve RSS. I don't have anything else to add to that.

If you know what these are, you don't need me to explain them to you. These are terminal RSS readers which are highly customizable and scriptable. These are probably the best options as far as RSS readers go, but they can be intimidating if you're not used to working in a terminal. Still, I feel like this article would be missing something without giving them a passing mention.

And that's about all I have to share with you today! I hope you try out RSS and find it useful. If you hate big tech but still find sites like YouTube useful, RSS is absolutely essential. If you have any further questions, feel free to contact me via email or matrix!