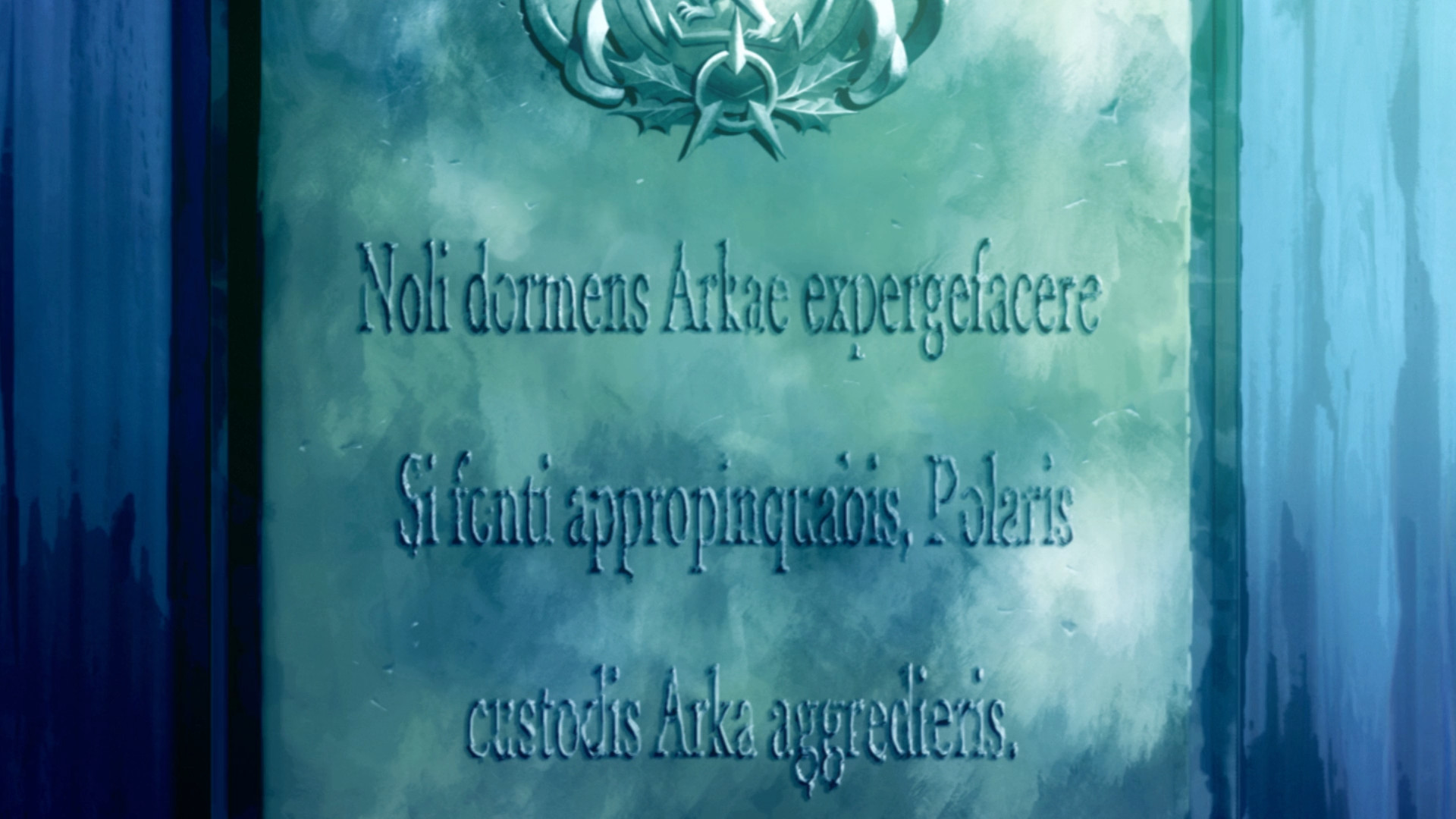 In episode 6 of Little Witch Academia, a foreboding message written in an ancient language is intended to endow within the viewer a sense of history and mysticism.

…but to those of us who have actually spent the time learning classical Latin it instead elicits a bit of a stern look.

Despite the prince's best efforts to convince me otherwise, I can confidently say we are looking at a case of bad Latin here.

I will talk about how it is wrong soon, but I think we should first examine why it is wrong. That is to say: how does this sort of thing happen?

How does a humble Japanese animator, in innocently trying to expand the lore of his anime, accidentally end up making such an obvious mistake? Couldn't the animators have used Google to identify their mistake? Ought they not to include such phrases if they couldn't be sure of their translations' accuracy?

This may stem from a common misconception about languages: the percieved importance of vocabulary.

Many people may naïvely assume that vocabulary is the most important component of language learning; it isn't. They may view languages as arbitrary lists of words that need to be memorized; they aren't. In fact, vocabulary is one of the least important parts of learning a language. Make no mistake: vocabulary is important but not nearly as important as concepts like grammar, morphology, and syntax. One can learn as much vocabulary as they like, but it ultimately will not help them if they do not already know how to use the language. This applies to modern languages but is especially true of older, more grammatically and syntactically complex languages like Latin.

This is important to understanding why this is ‘bad Latin’ as, as far as the vocabulary is concerned, this is mostly correct. Grammatically, however, it is a nightmare that would not be understood by most readers and speakers of Latin. “But Latin is a dead language,” you say, “so why should I care?” Well, as I said before, the same thing applies to modern languages like, for example, English: 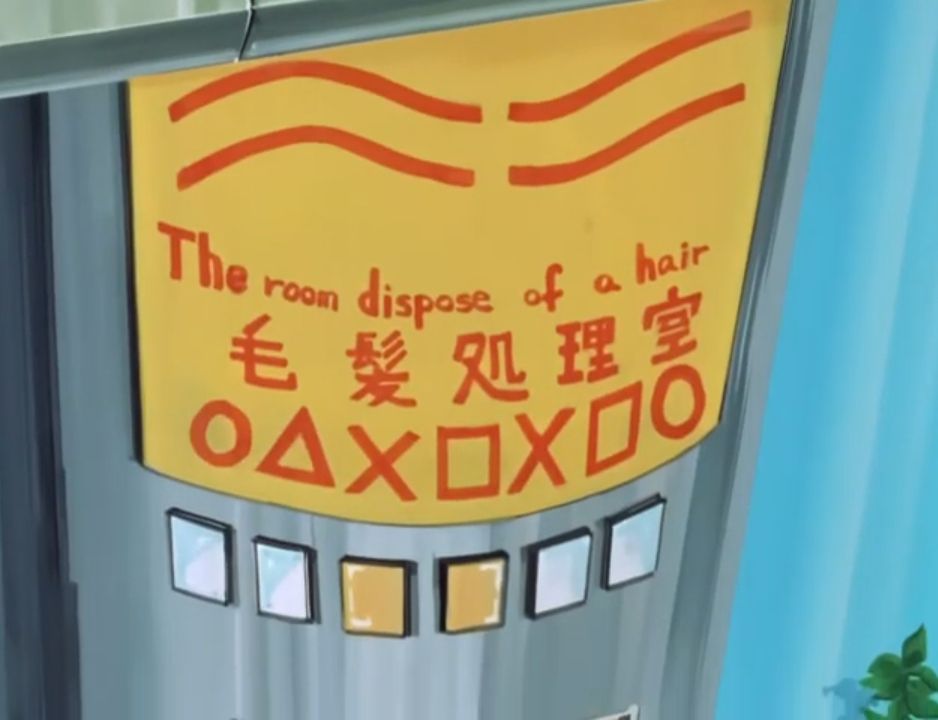 With all that in mind, let us return to the Latin phrase in question:

One of the characters offers a translation:

“Do not wake the sleeping Arcas.
Arcas, the guard of Polaris, will attack anyone who gets close to the fountain.”

A more accurate translation of what they are trying to say would be:

“If you approach the fountain you will encounter Arcas, the guard of Polaris.”

Even this is a bit of a stretch.

So what's wrong with it?

In order to understand why this is wrong, we must quickly examine Latin's noun cases. Latin is what's called a highly-inflected language. That means words often change their form to indicate their grammatical function. In English, this only really applies to pronouns and some verbs. In the following sentences

I eat breakfast in the morning.

I ate breakfast this morning.

one can look at the words eat and ate in isolation and understand their grammatical function. You don't need a whole sentence to understand that ate is referring to an already completed action. Most words in English do not work like this. Take this sample sentence:

The boy calls the girl.

What determines the grammatical function of the boy and the girl is their placement within the sentence. Just seeing

in isolation does not tell you anything. Furthermore, just by rearranging the words in the sentence

The girl calls the boy.

In Latin, nearly every word changes its form to indicate its meaning. Here is the same sentence translated into Latin:

Because the words indicate their meaning just by their form, they can be arranged in any order and still mean the same thing. Some of the following sentences, for purely stylistic reasons, aren't particularly good Latin, yet for our purposes are grammatically correct and all mean the same thing.

Furthermore, one could also completely change the meaning of a sentence while leaving the word order intact:

These different formations of the same word (servus, servum, etc.) are called cases. Those boldended bits are how Latin readers identify those cases and are called case endings.

Each of Latin's noun cases have specific grammatical functions. Latin has 5 important noun cases, but we're only going to concern ourselves with the ones relevant to our translation.

If you've been paying attention, you may be starting to see why the Little Witch Academia example is bad.

Have you figured it out yet? It's because ALL OF THE NOUN CASES ARE WRONG.

This is meant to translate as “Do not waken the sleeping Arcas.” In Latin the words for the sleeping Arcas should be rendered in the accusative case, which corresponds to the direct object in English. Unfortunately, they aren't. Instead, the word for the sleeping seems to be rendered in the nominative case (the subject in English). It's also mispelled. The nominative form for this word would be dormiēns, yet what we really want is the accusative: dormientem.

You may have noticed that not all of the accusative case endings are identical.

In case this is confusing, you may think of this word-altering-process as being somewhat similar to verb conjugation, as in a word is changing its form to indicate its grammatical function (like how comer in Spanish means “to eat” but como means “I eat”). In this sense, declensions are to nouns and adjectives as conjugations are to verbs.

Putting these words into the proper cases and declensions gives us:

Miraculously, the verb conjugations happen to be correct.

Now this is the part where our translations diverge. If you'll recall, the character translates the second sentence as

“Arcas, the guard of Polaris, will attack anyone who gets close to the fountain.”

But what it seems like is actually being said is

“If you approach the fountain you will encounter Arcas, the guard of Polaris.”

I imagine the first one is what the writers of the show intended, so that will serve as the basis for my translation.

And I have come up with:

This is basically a word-for-word translation, with the word order rearranged for authenticity's sake. What's interesting to note is that this looks strikingly similar to what is actually written in the show. If I take the time to tidy up the bad grammar of the original text, the similarity becomes even more apparent:

All we needed to do was add 2 words and change the cases and conjugations. This is the true power of Latin: the ability to say very much with very little. The flexibility with word order also allows for some of the most beautiful-sounding poetry ever written; writers can worry less about word order and more about the language's natural rhythm.

Something you may have noticed are those little lines above the letters in my writing. Those are called macrons and signify vowel length. Vowel length is very important to the natural sound of Latin (it's especially important for poetry). Marking vowel length isn't always necessary so many choose not to do it. Noli and nōlī are both acceptable spellings of the same word.

And with that, we have finally transformed our original broken sample

into something grammatically correct!

Little Witch Academia, despite being Japanese and having all its characters speak Japanese, is supposed to take place in London. So this inscription would realistically look more or less as I have written it, perhaps without the macrons and in a more archaic font. If this inscription came from the ancient Romans, however, it would look quite different.

Did you know that the ancient Romans did not use any punctuation or capitalization? If they were to write the same thing, it might look something like this:

How's that for complicated?

Next time somebody tells you punctuation isn't important, show them this until they start crying.